But when being the solution involves learning firsthand about the lives of people on the streets, that takes some extra determination and sharper focus. Two volunteers said joining an annual predawn count of people experiencing homelessness in Maricopa County on Jan. 28 gave them new insights about the issue and the humanity of the people living without shelter.

Supriya Paidemarry was one of several AmeriCorps VISTA volunteers through ASU’s School of Social Work who at 3:15 a.m. traveled the dark streets of downtown Phoenix along with Watts graduate student Candice Garcia and hundreds of others making the count. The Watts team consisted of eight volunteers.

One of VISTA’s program goals is to eliminate poverty and homelessness. So, to see how many people were on the streets dealing with these challenges was “really eye-opening,” Paidemarry said.

The county’s annual point-in-time (PIT) street count is called a one-night snapshot of the state of homelessness countywide, providing data to guide funding decisions for services and to develop strategies toward ending homelessness in the region.

Each January the PIT count, coordinated by the Maricopa Association of Governments, involves asking people where they slept the night before and to complete a brief survey. This knowledge is combined with information from local emergency shelters and transitional housing programs and reported to the U.S. Department of Housing and Urban Development.

Watts College is home to ASU’s AmeriCorps program, administered by the college’s Public Service Academy. Watts College is also a sponsor of the Human Services Campus, a collaborative force of 20 partner organizations with the shared outcome of ending homelessness for people every day.

“I was not a fan of waking up so early, but once we were out there it was a really good experience for us and put us in our place,” said Paidemarry, a Johns Hopkins University graduate who joined Watts College volunteers in an area near Central Arizona Shelter Services, a few blocks from the Arizona State Capitol, where several encampments are located.

Garcia said she was attracted to volunteering for the count because as she undertook her advanced standing Master of Social Work program, those dealing with homelessness were whom she was most interested in helping. The day was a good experience, she said, although the number of encampments she encountered was difficult to see at first.

“At first, just driving to the meeting site was a little bit of a reality check. Those encampments — I didn’t exactly prepare myself for the reality of it,” Garcia said. 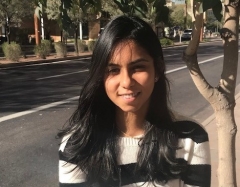 “We’re really fortunate to be here and to be able to volunteer, and (then) sleep in a warm home every night,” said Paidemarry, who plans to attend medical school. “These people experiencing homelessness may not be able to do this. But, by giving back and doing this, maybe we’re able to help.”

Coordinators helped the volunteers learn how to talk to people and learn their stories, she said.

“One person was homeless for seven years. He was 27 years old and homeless since he was 20,” Paidemarry said. “I think he just wasn’t at the right place at the right time. Some of them just haven’t caught a break, no one had given them a chance.”

Most of the people Paidemarry encountered were sleeping, but those who were awake were generally pleasant to talk to, particularly when they were told that the count was to help determine funding and services for those like them.

"The hope is we can do a better job to make this issue much, much smaller."

Garcia said she saw a woman who said she had a spouse and a child she could go back to, but said she was more comfortable on the street. A man who rode up to an encampment on a bicycle said he’d been homeless off and on for three years. He apparently had a job and was bicycling after work, but may not be earning enough to afford rent, Garcia said. 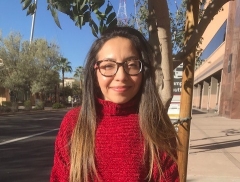 According to the the Maricopa Association of Governments, dramatic rent increases in recent years, resulting in evictions, have been driving up the number of people living on the streets throughout the region, compared with previous years when they were concentrated in certain areas.

In addition to those counted on the streets, volunteers also counted others without permanent homes who were staying at a shelter of some kind. In 2019, Maricopa County had 3,426 people in emergency shelters, transitional housing or a safe haven program.

Garcia said some people were very understanding and accepted the volunteers’ purpose for talking to them. Others were hesitant and distrustful.

“They had more of an attitude of ‘What do I get?’ because they weren’t getting anything today,” she said.

“It’s a reminder of what people are going through, and a nice reminder of remembering to acknowledge the people we see on the street,” Garcia said. “They’re people like us, trying to live their lives day to day and trying to do the best they can.”

Paidemarry agreed. When encountering those on the streets, we must all make sure to remember their humanity, she said.

“Just smile and talk to them. It’s easy to have a conversation. They’re people, after all.”

Garcia said she believed homelessness can be conquered, “otherwise we’re out there for nothing. The hope is we can do a better job to make this issue much, much smaller.”

Perhaps there may always be someone experiencing homelessness, she said. “But I think there can be a lot less than there are now.”